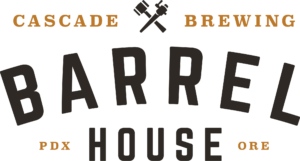 The Cascade Brewing Barrel House is our Eastside tasting room. This 2,100 square foot facility offers seating for 90 inside, plus seating for another 80 under a tented patio out front. Known as the House of Sour, it features at least 20 sour beers on tap at any given time, with another two taps reserved for sour beers straight from the barrel. The remaining taps pour Cascade’s non-sour beers. Every other Tuesday at 6pm, a live barrel is tapped, giving the public the opportunity to taste sour beer straight from the wood. To complement the beers, the Cascade Brewing Barrel House features a limited menu of small plates, sandwiches, salads and desserts, all made with local Northwest ingredients.
939 SE Belmont St, Portland, OR 97214 | CascadeBrewingBarrelHouse.com

Our Blending House is a 23,000 sq. ft. distribution center where all of our barrel aging, blending, packaging and shipping takes place. The bulk of the facility is a climate-controlled hall that houses nine oak foudres ranging from 50 to 65 hectoliters, as well as 1,300 oak barrels and puncheons. A second, non-conditioned hall is used for barrel and keg cleaning, as well as fruit processing and storage. The Blending House does not have a taproom, nor is it open to the public.

The brew house and production facility at Cascade Brewing first produced beer in the fall of 1998. This 10 bbl steam-fired brewery was designed by Brewmaster Ron Gansberg and manufactured by AAA Metal Fabrication of The Dalles, OR. The brew house combines the use of gravity wort flow and upward step infusion mashing in a melding of old world and new age brewing technique. This blend of artisanal and technical innovation produces high quality beers which set the standard for all our sour and non-sour beer programs. Total production of sour and non-sour beer to date stands at 3,200 bbls per year with the potential build out to 5,000 bbls annually. The brewery uses multiple strains of yeast through the course of a year in our 10, 20 and 30 bbl fermenters. Our brewing staff sets a high standard of excellence and repeatability in a culture of innovation, inspiration and artistic expression.
7424 SW Beaverton Hillsdale Hwy, Portland, OR 97225 | CascadeBrewing.com