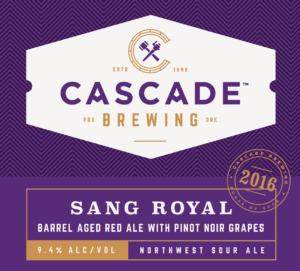 PORTLAND, Ore. – On Nov. 14, following a three year hiatus, Cascade Brewing will release its highly acclaimed Sang Royal. The beer will be available in 750ml bottles and on draft through Cascade’s regular distribution channels, and at both its Portland pubs.

Sang Royal is a blend of double red ales aged in oak barrels, foudres and puncheons for up to 22 months with Pinot Noir grapes from Oregon’s famed Willamette Valley wine region. The most sophisticated in Cascade’s series of “Sang” projects, Sang Royal captures complex notes of summer berry fruit, plum, cola, earth and spice, with a vibrant acidity and soft tannic structure. It comes in at 9.4 percent alcohol by volume.

Sang Royal is a Tier Two offering; Cascade’s bottles have distinct label styles for each of the three Cascade Brewing pricing tiers, with each label within the tier utilizing distinctive colors to clearly differentiate each beer. The tiers differ by the style of beer used in the product, the type ingredients contained within, the time aged in the barrels and types of barrels used.

Look for the next Cascade beer, Midnight Bramble, to be released in bottle and draft in December.