On Tuesday, Sept. 12, Cascade Brewing and Bruery Terreux will each release a version of their long-awaited collaboration beer: One Way or Another. One Way or Another is a blend of sour triple ales aged in oak wine barrels for up to 16 months with regional ingredients including Oregon marionberries and California Meyer lemons (7.9% ABV). Both projects will be available in bottle and draught through the respective brewery’s distribution channels.

Last spring, the crew from Bruery Terreux visited Cascade, AKA the House of Sour, to discuss the blend and to brew the first batch of what was to become One Way or Another. The following week, Bruery Terreux replicated the same recipe in their brewery in Anaheim, Calif. The two brewery projects feature different labels and graphics to delineate between the two.

“We are so excited to finally release this project with Bruery Terreux,” exclaimed Tim Larrance, Cascade Brewing vice president of sales and marketing. “With each brewery crafting their own blend, this limited offering illustrates how a single recipe can be interpreted One Way or Another.”

Cascade Brewing will host a One Way or Another Release Party at its Barrel House at 939 SE Belmont St. in Portland on Sept. 12 beginning at 5pm, featuring the release of both collaboration beers, plus seven Bruery Terreux beers on tap, vintage Cascade Brewing bottles for sale, and a special live tapping with members of the Bruery Terreaux team.

One Way or Another is a Tier One offering; Cascade’s bottles have distinct label styles for each of the three Cascade Brewing pricing tiers, with each label within the tier utilizing distinctive colors to clearly differentiate each beer. The tiers differ by the style of beer used in the product, the type ingredients contained within, the time aged in the barrels and types of barrels used.

The next beer to be released by Cascade Brewing will be Vitis Noble 2016 on Sept. 19. 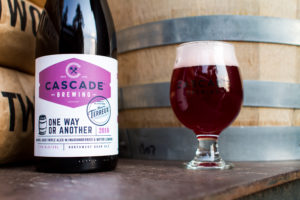 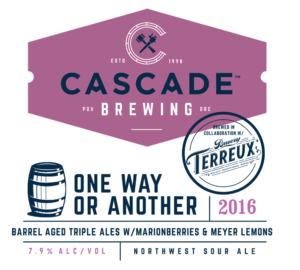