Cascade Brewing Collaborates with Team Rubicon on Veterans Day Beer; brewery will donate 100% of the proceeds raised to the veteran-led disaster response non-profit

PORTLAND, Ore. –– Nov. 5, 2019 –– Cascade Brewing has announced a collaboration with Team Rubicon on a Veterans Day beer. Cascade will release Continued Service IPA on Veterans Day––Monday, Nov. 11––on draft and in 16-ounce cans at its two Portland pubs, as well as on tap at various establishments throughout the Portland area.

Cascade has committed to donating 100% of the proceeds from sales of Continued Service to Team Rubicon, a veteran-led disaster response non-profit that unites the skills and experiences of military veterans with first responders to rapidly deploy emergency response teams to provide immediate relief to those impacted by disasters and humanitarian crises.

Additionally, Yakima Chief Hops donates $3 from every pound sold of the 2018 Veterans Blend, used in this project, to the Semper Fi Fund, a non-profit that provides immediate financial assistance and lifetime support to post 9/11 combat wounded, critically ill and catastrophically injured service members.

About Cascade Brewing
Founded in Portland, Oregon in 1998, Cascade Brewing has been a pioneer in the sour beer renaissance since 2006 and the proud innovator of the Northwest Sour Ale. Its distinctive sour beer blends feature fruit forward, barrel-aged ales with an emphasis on project year-to-year variation. These beers offer a complex array of flavors derived from the acid, the fruit and the residual flavors present in the barrels in which they age. The resulting beers offer a complex array of flavors and aromas derived from with each project year release capturing the unique subtleties of that year’s growing season. Cascade Brewing has two Portland taprooms: the Cascade Brewing Barrel House in Southeast and the Lodge at Cascade Brewing in  Southwest. 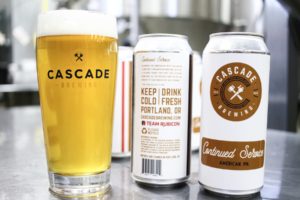