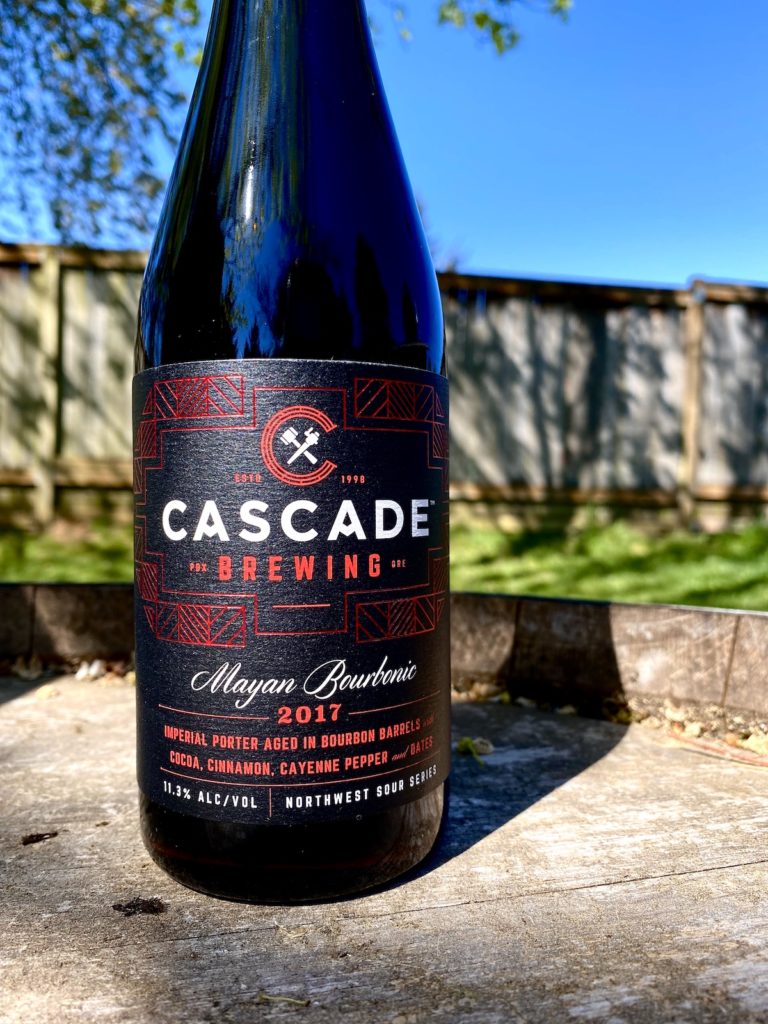 (PORTLAND, Ore. –– April 14, 2020) –– Cascade Brewing has announced the release of Mayan Bourbonic 2017. The beer will be available in 500ml bottles and on draft starting Thursday, April 16, at both Cascade Brewing pubs and through its distribution network. In the Portland area, it can also be pre-ordered at CascadeBrewing.shop for delivery or pickup at the Cascade Brewing Barrel House at 939 SE Belmont St.

A variation of the brewery’s award-winning Bourbonic Plague blend, Mayan Bourbonic features sour imperial porter aged in Bourbon and wine barrels with dates for up to two years, then infused with Peruvian cocoa powder, Ceylon cinnamon and cayenne pepper. Inspired by the traditional drink of the ancient Mayan civilization, Mayan Bourbonic delivers notes of bitter chocolate, Bourbon and cinnamon with a mild cayenne spice and delicate carbonation level (11.7% ABV).

Mayan Bourbonic has been served as a small draft blend at Cascade pubs in the past, but this marks the first time the project has been available in bottles. The original Bourbonic Plague, from which Mayan Bourbonic is adapted, won Cascade its first gold medal at the 2009 Great American Beer Festival in the wood- and barrel-aged sour beer category and has been a fan favorite ever since.

During the COVID-19 stay at home order, Cascade Brewing is making its beer and limited food available locally on its online store, offering a selection of cans, crowlers, 500ml and 750ml bottles. Pick up hours at the Barrel House are 3pm to 7pm Thursday through Sunday, and delivery day is Thursday from 10am until the route is complete. View the website for full delivery details. Food and Cascade beer is also available for pickup only at the Lodge at Cascade Brewing, view LodgeAtCascade.com for details.

About Cascade Brewing
Founded in Portland, Oregon in 1998, Cascade Brewing has been a pioneer in the sour beer renaissance since 2006 and the proud innovator of the Northwest Sour Ale. Its distinctive sour beer blends feature fruit-forward, barrel-aged ales with an emphasis on project year-to-year variation. These beers offer a complex array of flavors derived from the acid, the fruit and the residual flavors present in the barrels in which they age. The resulting beers offer a complex array of flavors and aromas derived from with each project year release capturing the unique subtleties of that year’s growing season. Cascade Brewing’s beers are collected by sour fans and connoisseurs around the world. Cascade Brewing’s two pubs in Portland, Oregon, include the Cascade Brewing Barrel House at 939 SE Belmont St. and at The Lodge at Cascade Brewing at 7424 SW Beaverton Hillsdale Hwy.